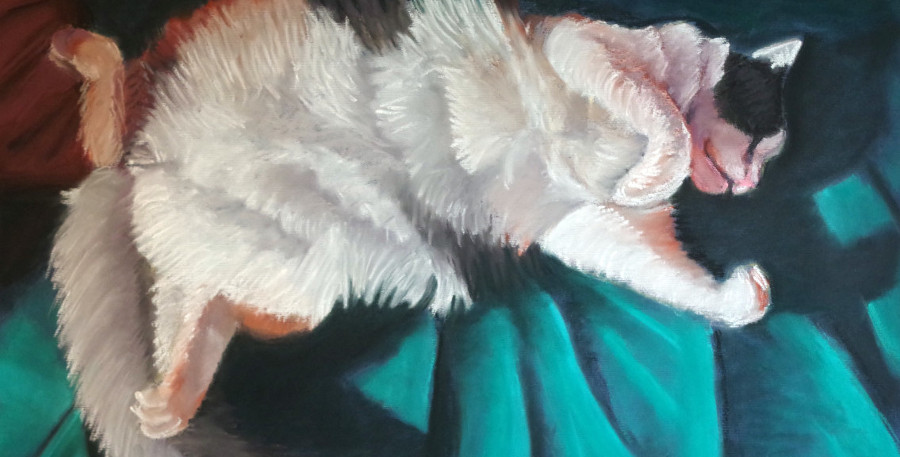 A few years ago I adopted the habit of practicing a personal activity every day, or at least once a week when I’m busy. I regularly go back and forth between pursuing new interests and rekindling old passions, but I always practice with dedication to learn long-lasting skills.

The passion I originally had for drawing quickly grew to computer graphics, which in turn is the reason why I discovered computer programming. I recently learnt to play the piano and am currently working hard to learn Chinese.

I have always been fond of drawing but didn’t practice with enough discipline when I was in middle and high school. Once a student at École polytechnique, I adopted a more regular practice by joining the fine arts association. I then spent most of my time experimenting and trying to use colors, and had a hard time finding a technique which suited me. I didn’t manage to make much of oil pastel and oil paint, though I intend to give another shot at oil paint, and was not convinced by acrylic. As a result, I didn’t improve my skills much during this period. 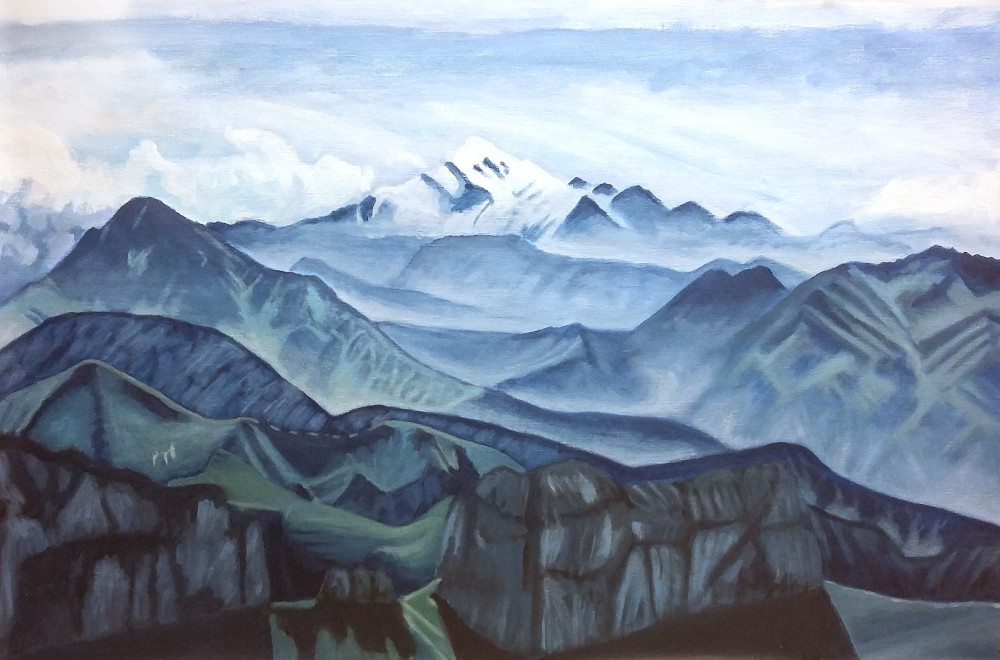 After my graduation, I discovered soft pastel and immediately became fond of this technique. It really feels like drawing, but with colors, and thus seemed very natural. It is also very easy to fix a mistake or blend colors, leading to a lot of freedom, and the only major drawback is the fragility of the result - I’m actually having a hard time storing my drawings.

The popularisation of pastel in the 18th century, the golden age of pastel, was actually greatly facilitated by the invention of two efficient preservation techniques: fixative, which would be spread on the back of a drawing to hold pastel powder in place, and flat glass, to cover paintings and drawings. Source: Pratique des arts, special issue n°44, July 2017 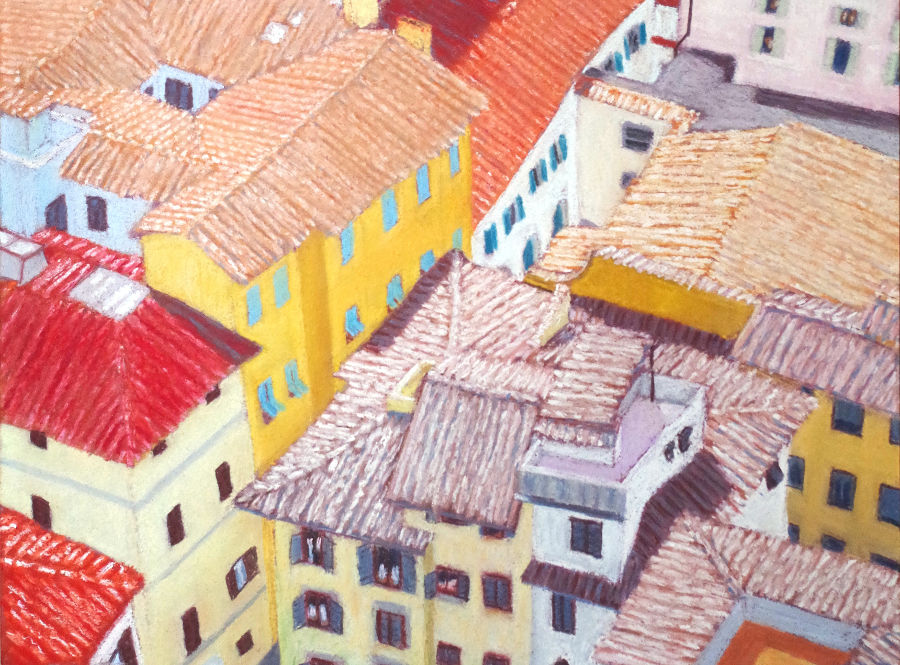 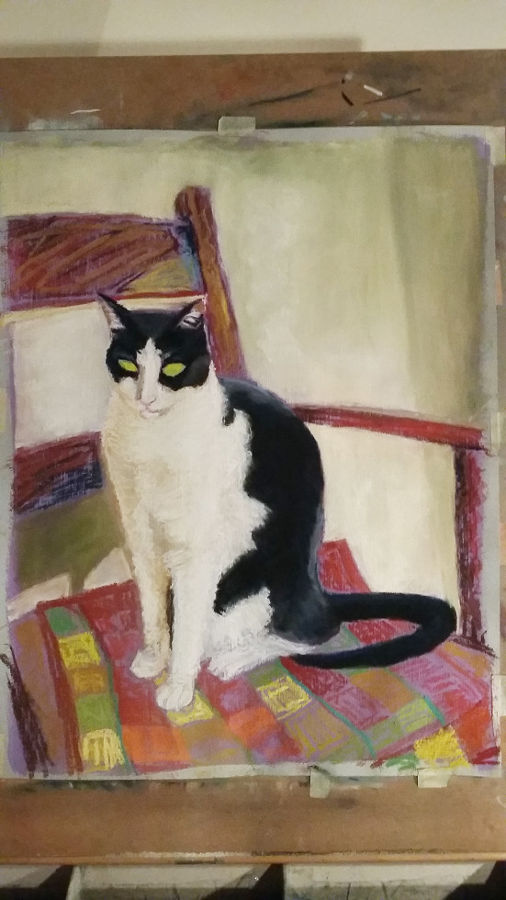 Cat WIP on paper I prepared myself

I often read that a good way of redoing part of a pastel drawing is to use an eraser. I'm not very fond of this technique, and prefer using a bruch with stiff hair. Using a brush is a lot more precise, allowing you to remove pastel exactly where you need to and thus without the risk of damaging the surrounding areas. It also works well at removing the excess of pastel once the paper has reached saturation. As all the layers of pastel powder blend a bit, by gently scratching the surface you can reveal one of the inner layers, which in practice is often similar to the top one. This allows you to desaturate the paper without destroying your work, leaving room for corrections.

I sometimes quickly sketch the model I'm drawing by using colored pencils, before working with pastels sticks. I once encountered the issue that depending on the pencils used, it is not always possible to cover their strokes with pastel. I now choose my pencils with a lot of care whenever I do so.

When doing pastel, I love working with Sennelier's pastel card, but it may be expensive. I once found by luck a small stock of recycled paper for art, which proved perfect for pastel: the touch is very pleasant, it retains pastel well and has a very high level of saturation. Also, it is less abrasive than pastel card, thus preserving your pastel sticks. I also had a try at doing my own paper with powder of pumice stone, but I need to improve my technique because the result is a bit uneven so far. 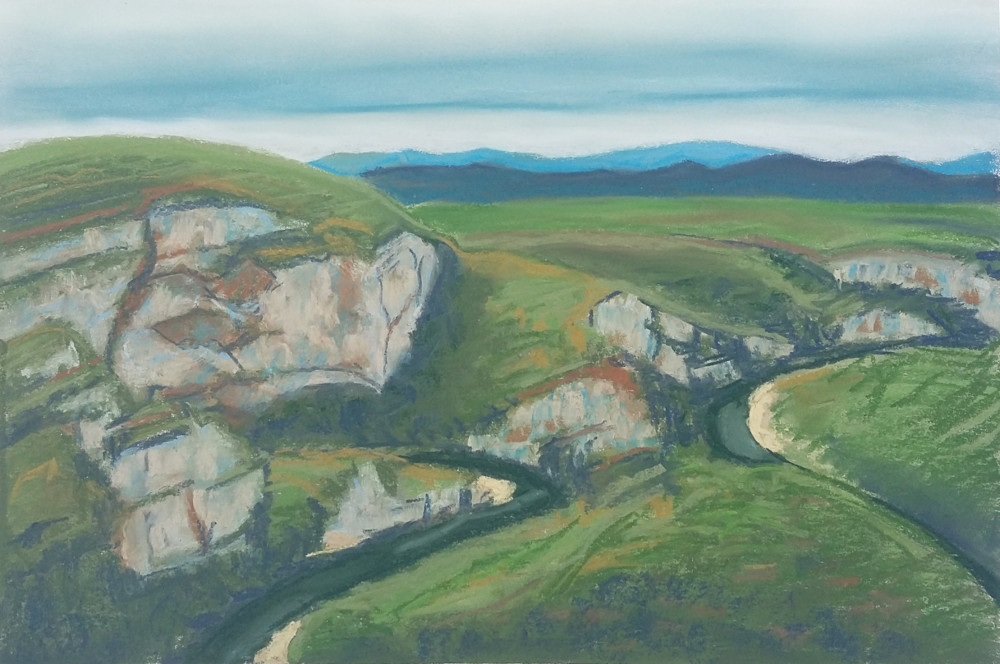 In parallel, I also explored techniques like ink or gouache. I didn’t spend as much time as I would have liked on gouache, but I like this technique a lot. Though the material is not as beautiful and noble as oil, it is a very interesting technique because by drying fast it allows one to work quickly, and it gives interesting tranparency effects. Any mistake can also be reworked, contrary to watercolor for which you need to adopt a completely different philosophy by accepting the lack of control. Another advantage over pastel is that, gouache being a paint, you don’t need a huge collection of tubes to work because you can derive what you need by mixing pigments - you do the same with pastel, but directly on the canvas, making it more difficult to control the effect.

After a lot of practice with pastel I became hindered by my drawing skills, and decided to work on it it by progressively switching back to drawing without colors, or with only a few. I spent a lot of time playing with different types of pencil or even with felt pens. At some point, I particularly enjoyed sketching with pierre noire, because it produces interesting effects and allows me to work faster than with pencil. I also loved practicing the trois-crayons technique (3-pencils: pierre noire, sanguine, white, usually applied on a mid-tone paper), a technique dating from the 16th century, which was intensively used to make portraits. 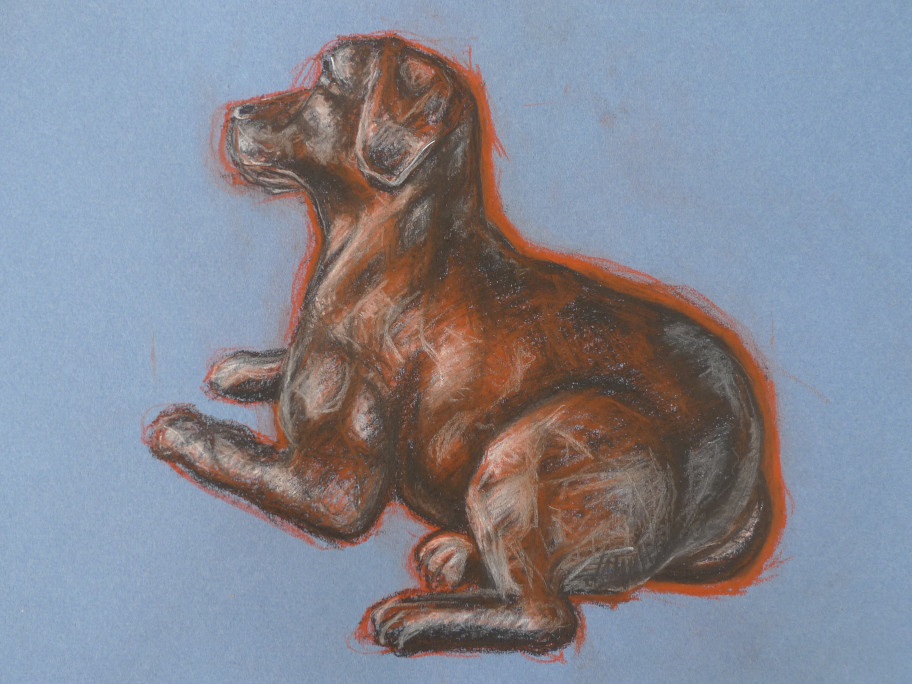 I generally work from a real model rather than from a photography, because it trains the ability to see in space and often leads to more lively results. It also has advantages, like the possibility of moving around, getting closer, seeing the model from a different perspective in order to comprehend it better. I particularly enjoy drawing from statues in museums, or going to the Jardin des Plantes to draw real, living animals. I either wait for them to repeatedly go to the same position when they wander around or circle in their enclosures, at which point I quickly add more strokes to my sketch, or just try to capture the idea of their movement when they move too much (damn monkeys…). I also love going to live model sessions in Montmartre or elsewhere, especially with friends. 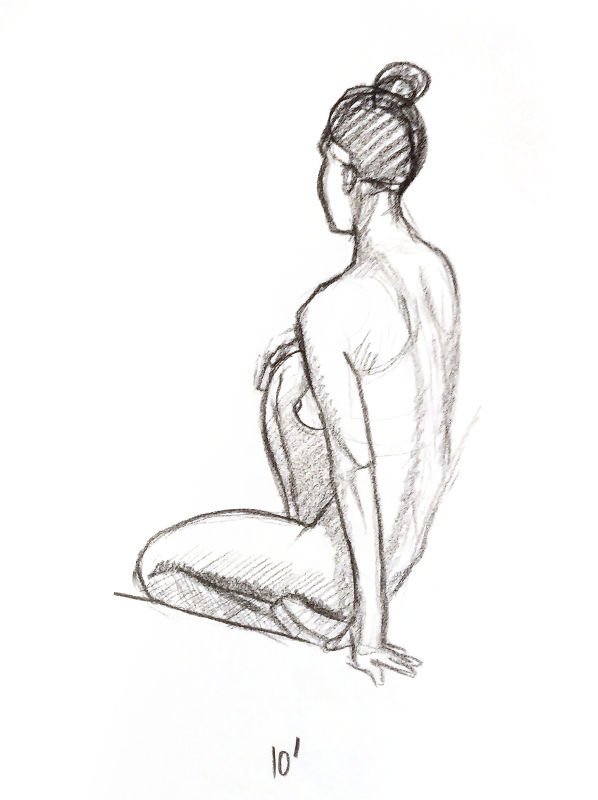 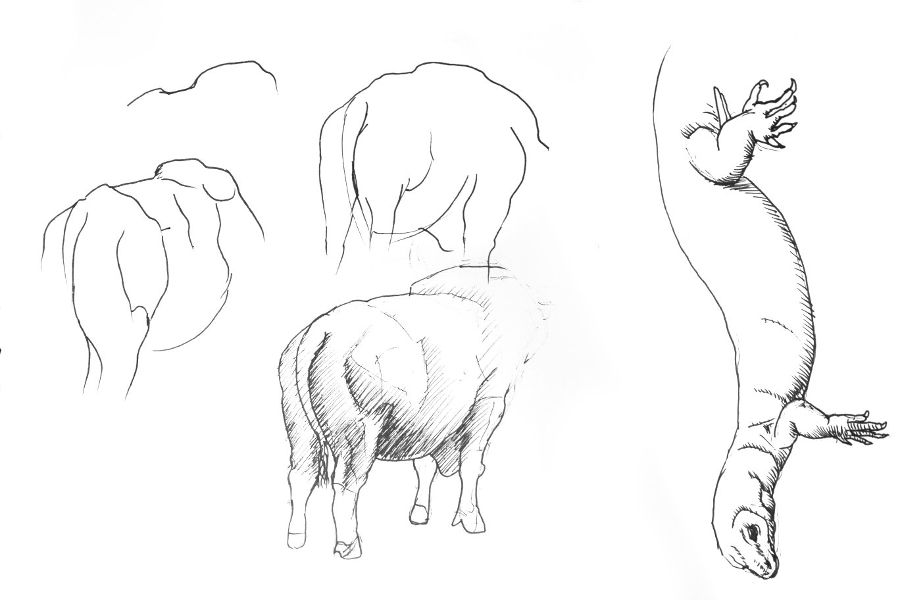 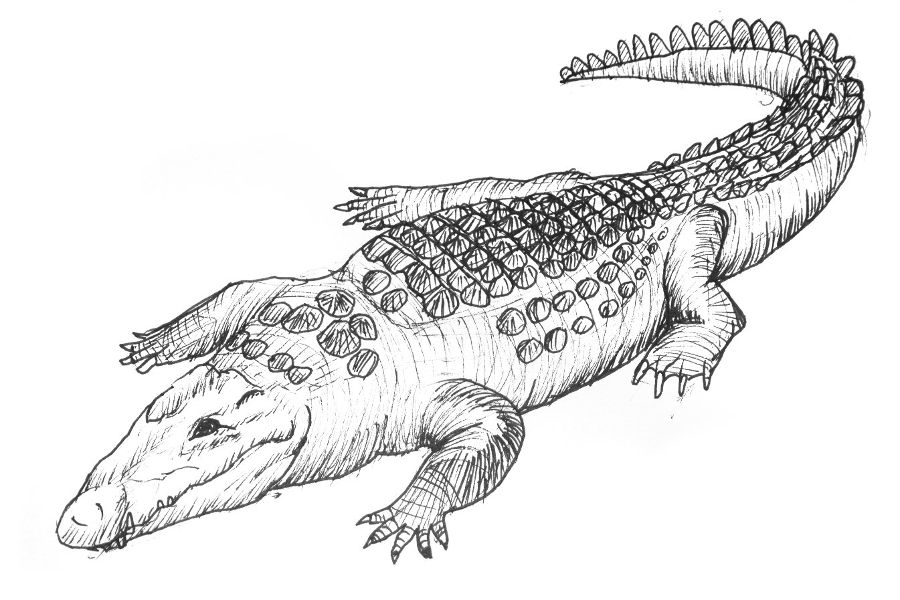 Lately, I’ve focused on drawing with simple pencils because it is very demanding. While you can easily get interesting effects with techniques like charcoal or pierre noire, pencils are very neutral and, in a way, lack personality. If you draw a stroke with pierre noire, the stroke is interesting in itself and can give strength to your drawing. On the contrary, there is nothing more boring than a pencil stroke. Using pencils thus takes more time and forces you to be extremely strict and rigorous, but on the other hand gives you a lot of control and leads to very subtle and interesting results. It also makes you learn a lot - a lot more than the other techniques. 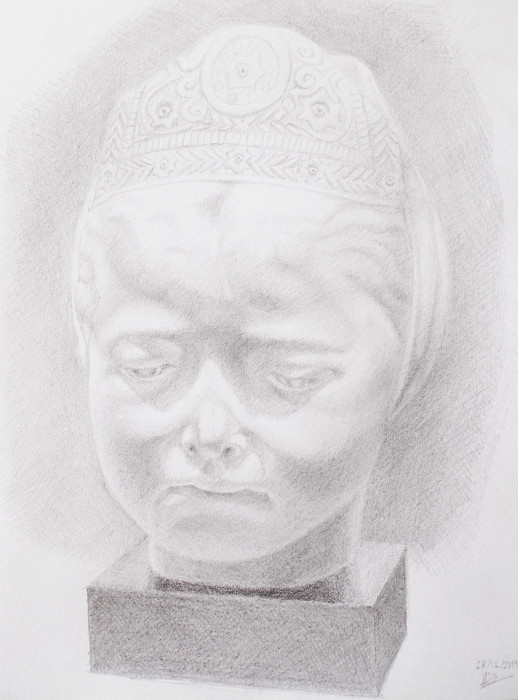 Whenever I need to buy art material, I go to Sennelier, at quai Voltaire in Paris, a historical store dating from 1887. Sennelier is also a brand, and a good one, as the founder Gustave Sennelier, who had a training in chemistry, started his shop by creating his own colors for artists. Most of my pastel sticks are actually from Sennelier. 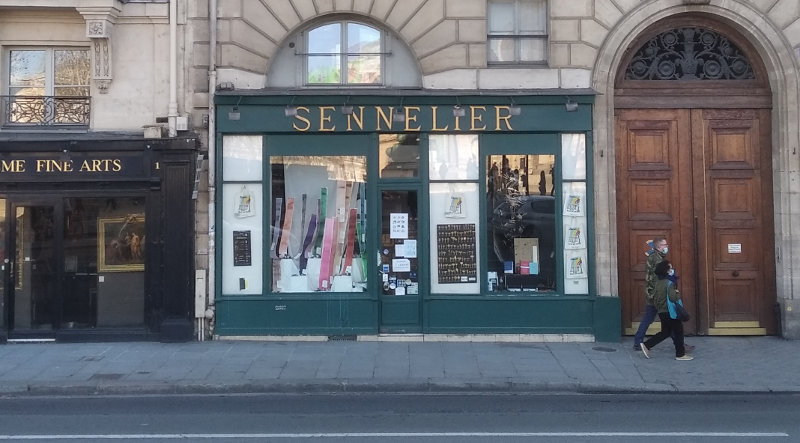 The Sennelier shop in Paris

I particularly like the place because of its atmosphere, and whenever one of my friends wants to start drawing or painting I take she/him there to get her/him set up. The place is a bit of a mess, and immediately upon entering you only see piles and piles of art supplies from the floor to the ceiling. The shop is not big, but the selection is huge: it is more complete and diverse and actually cheaper than many other, bigger shops I went to. While I don't like shopping very much, I love going there just to "dig" and look for interesting things. Of course, I always end up buying something I didn't came for.

The people working there are also very nice and know a lot about the products they sell, meaning they always give good advice whenever you need some. For me, going there is a bit like going to Shakespeare and Company for someone who loves English literature. 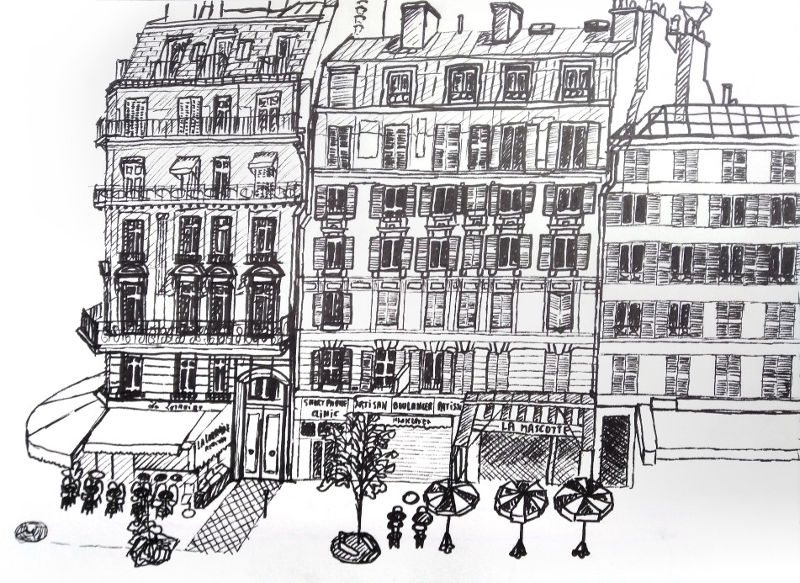 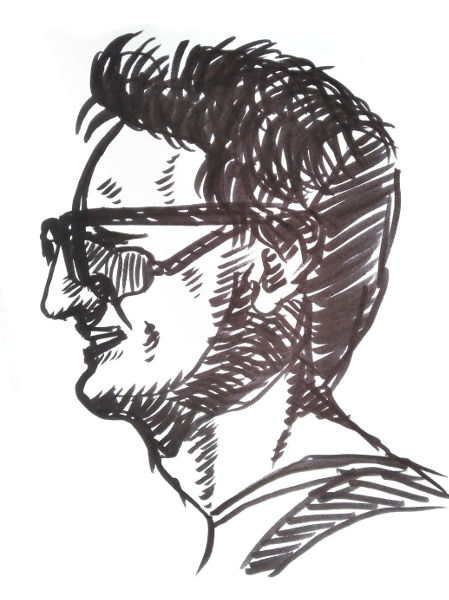 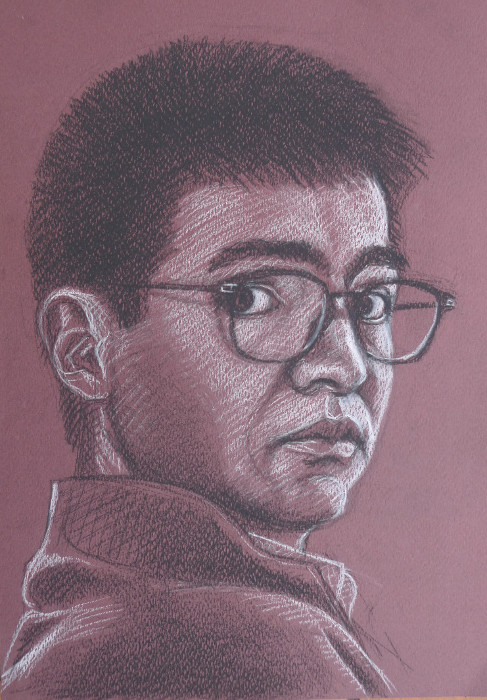 Self-portrait (executed with a mirror), Pierre noire and white pencil on colored paper, 42x29.7cm.
My favourite museum is the musée d'Orsay, in Paris. I love the paintings, and I used to go there with friends to draw the sculptures as they have an extremely good sculptures collection. There is a nearby café, Les Deux Musées, where we would go after the drawing session to chat a bit - as a side note: their hot chocolate with cream is marvelous. 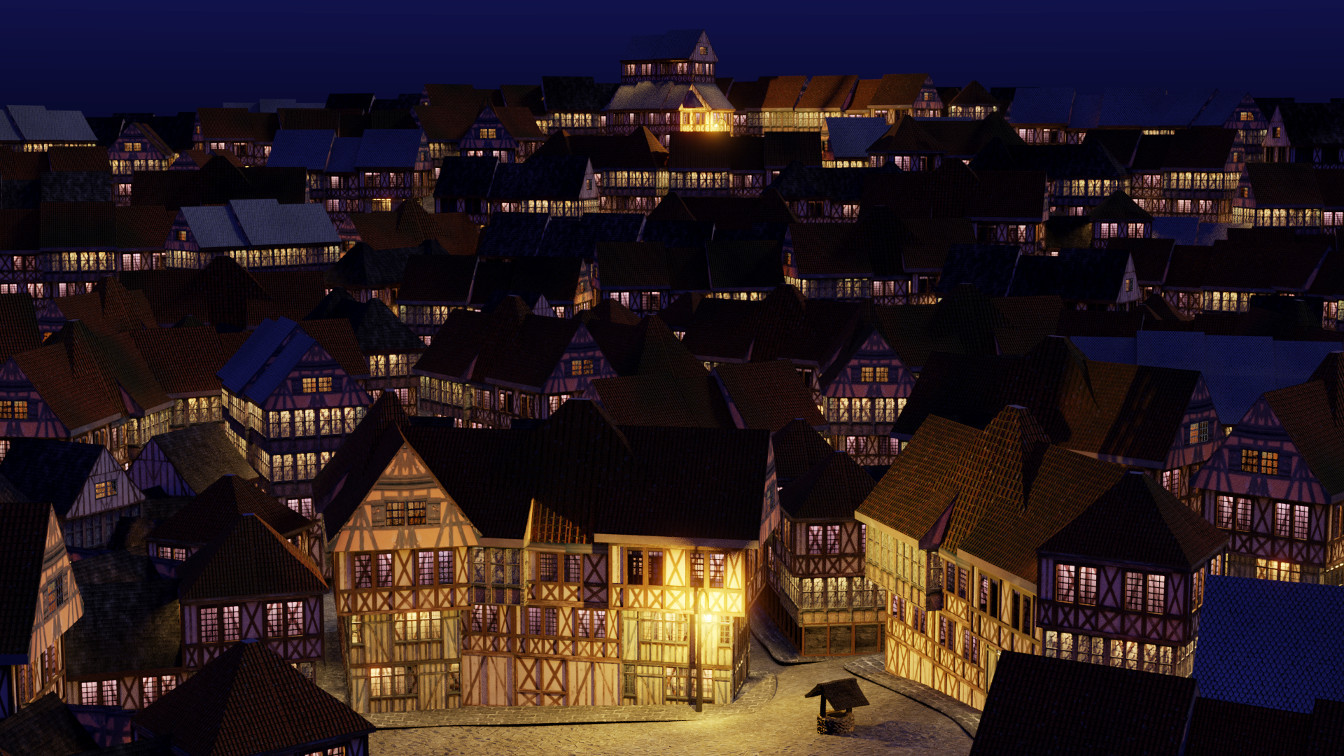 After a very long break, I recently hopped back on Blender to have a bit of fun. 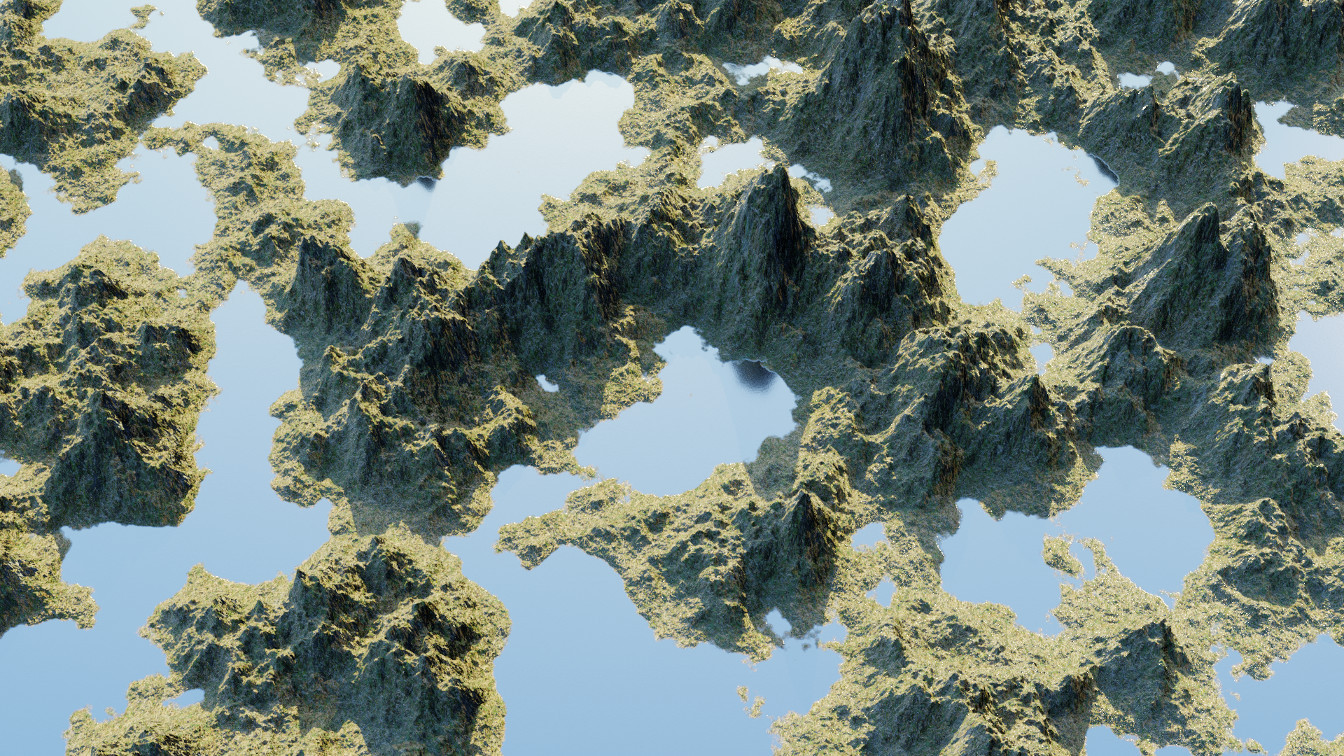 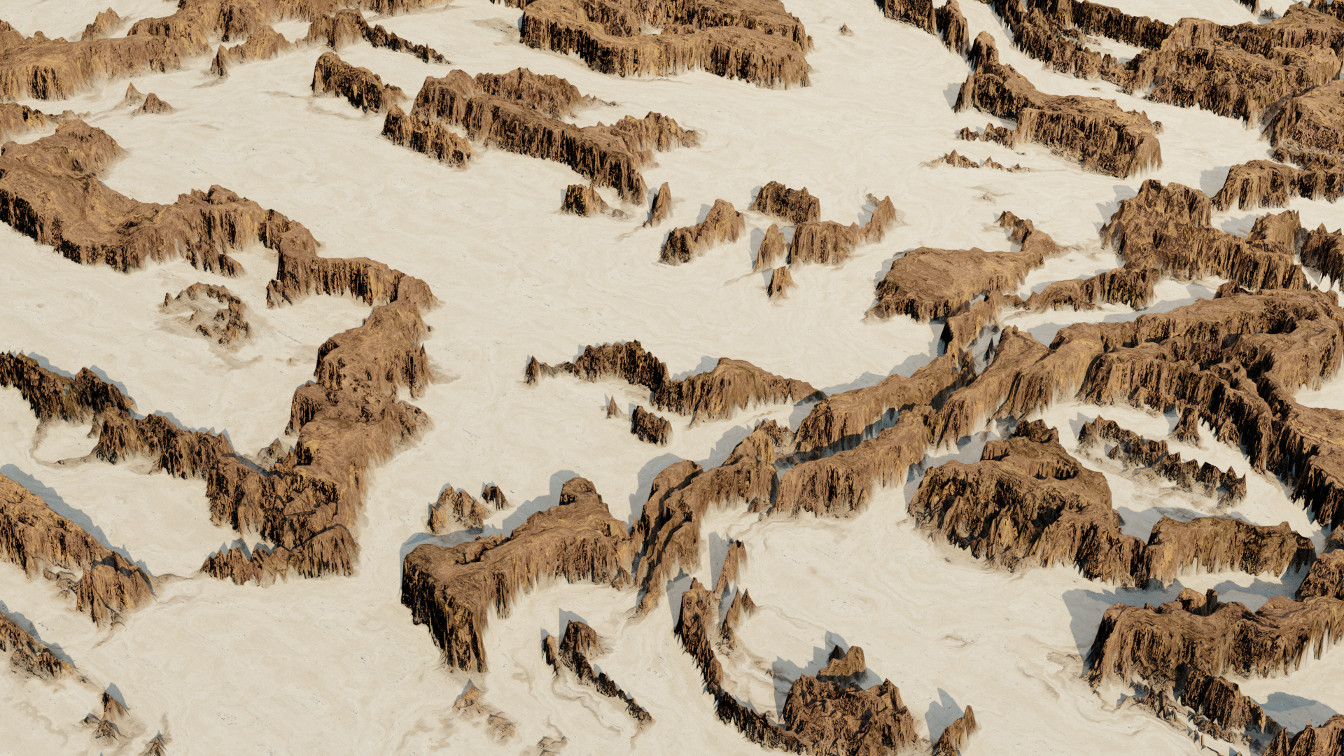 I particularly love playing with shader graphs to get interesting results. It reminds me of when I used to program shaders in C++ and HLSL while in high school.

I lived in Shanghai in 2019, which allowed me to discover the Chinese culture and, more specifically, the Chinese language. I fell in love with this language, and since then have been practicing with diligence.

Frankly, I think we should measure the time spent on learning Chinese in kilometers of copied characters

While it is easy to learn Chinese in China, I had to adapt a bit once I was back in France to build a proper learning environment. My way of doing it: Chinese class once a week, tandems with some Chinese partners at least twice a week, a bit of reading, and Chinese TV series when I have spare time. I used to learn vocabulary with the flash cards application Anki, but have stopped because it proved quite inefficient. I always focus on tandems when I don’t have much time, because I think practicing conversation is by far the most useful, and it is also a lot of fun. Note that it is easy to find partners on applications like Tandem.

About TV series, I started with 致我们单纯的小美好 and am now watching 大江大河. I’m usually not fond of sickeningly sweet and romantic dramas like 致我们单纯的小美好, but at least it is easy to understand so I recommend it for a start. I definitely recommend 大江大河. Besides, I also heard a lot about the costume drama 琅琊榜, which had a lot success in China due to its rich and complex plot. It is good to watch (I love the credits song, by the way), but not that useful to study Chinese unless you want to learn a lot of old and specific terms, as well as all the possible ways of addressing someone at the imperial court (殿下, 陛下, whatever…).

I’ve recently discovered the science fiction author Liu Cixin (刘慈欣) and really love his books. If you don’t know where to start, I recommend his short novel The Wandering Earth (流浪地球 - don’t watch the movie). Reading proved to be my most efficient way of acquiring vocabulary. As finding Chinese books can be difficult outside of China and importing them is quite expensive, I buy ebooks on my Kobo reader. Even online, I sometimes have trouble finding mainland books and thus often end up buying the Taiwanese version (i.e.: with traditional characters), but as I intend to learn calligraphy I guess it is for the best… 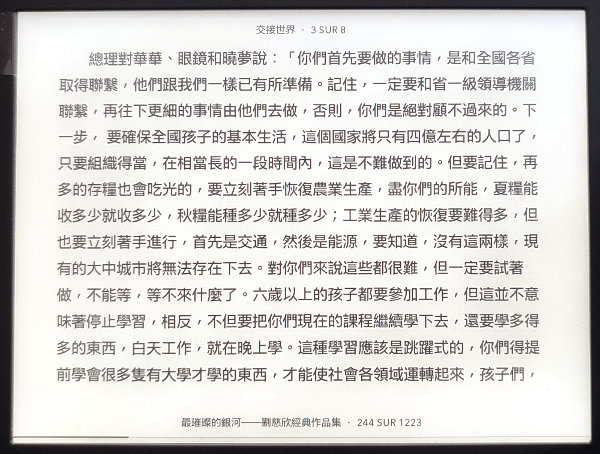